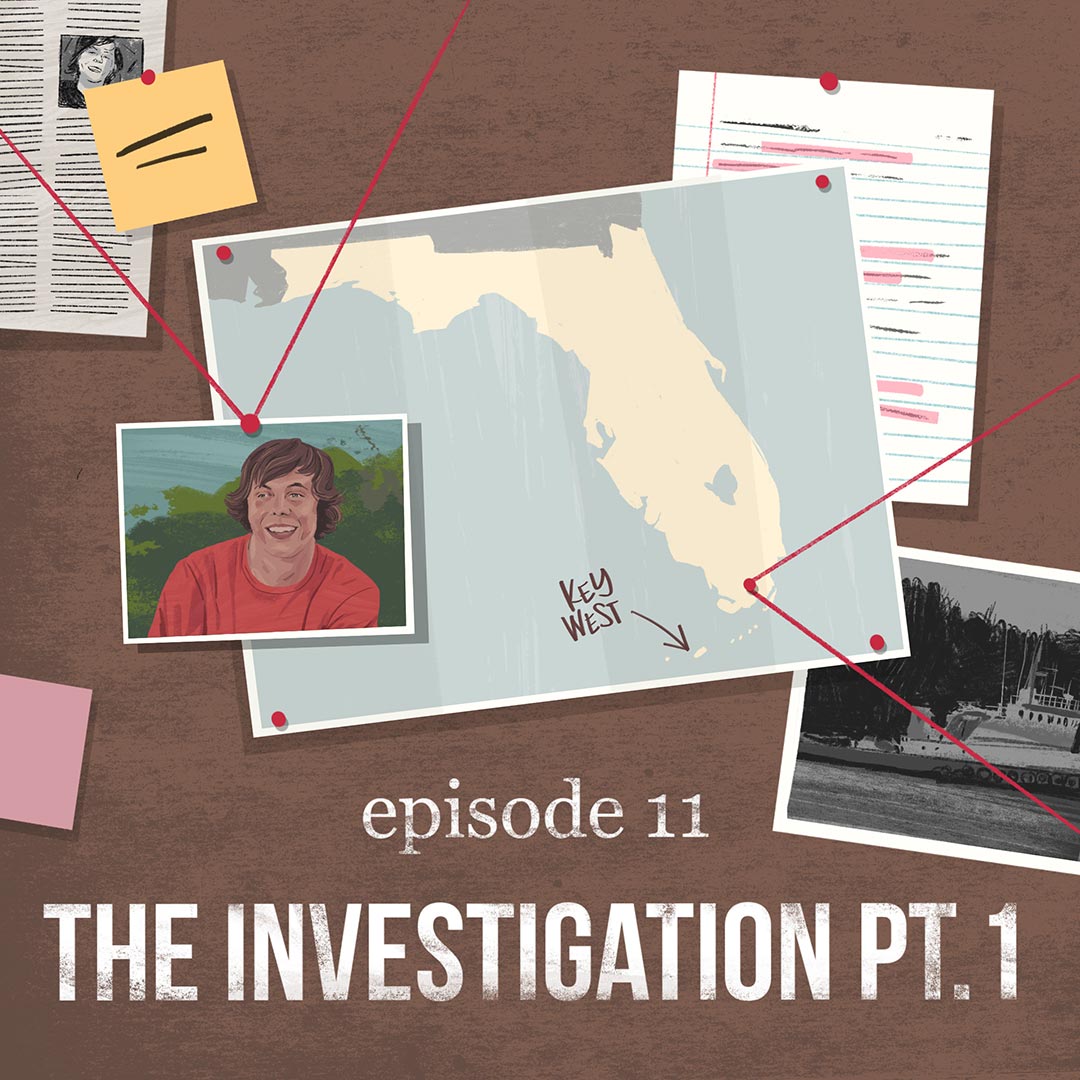 Dennis travels with Jacob to Nashville to meet Sheila Wysocki, a private investigator. Sheila and her team of PIs agreed to investigate Christian’s case. A strategy is devised with the first step being a trip to Key West, FL, where Whitley is residing. Jacob travels to Key West, FL with three PIs (Michael Kenney, Jay Marin, and Claudia Barrios) and the investigation begins.

Gale: All right, Jordan, I need you to tell me everything that you know, you can start from the very beginning.

Now, first of all, this is about Christian Andreacchio, right?

Gale: Right. And you used to know him?

Jordan: We weren’t tight. But I knew him.

Gale: Knew of him.

Jordan: At the time, I was the only one that he would allow his girlfriend to hang out with, who was Whitley Goodman. So, that was when they were dating. He would only let me hang, he would only let her hang around me because I was a good influence.

Gale: Okay. How long did you know Whitley?

Gale: Okay. How long did you know Whitley?

Jordan: I have known Whitley since, oh my goodness since the fourth grade. We went to school together and were on the cheerleading team. But we never talked or anything. Like, we weren’t friends. But we knew each other.

Jordan: Her mom was my coach.

Jordan: It was during the summertime, I do believe. We were just now starting to wear shorts.

And they dated for eight months, and he gave her a ring. A ring on her finger. And then he bought her a BMW. She had it all. She had a place to stay. She had someone buying her food. Buying her new clothes, taking her shopping. Expensive makeup. Stuff that she didn’t even deserve. They moved in together, and that was when she started cheating on him with my ex-boyfriend, Matt Miller.

Gale: Okay. So, when they moved there, she started cheating on him?

Jordan: And he, but he knew about it.

Gale: What did he think about that?

Jordan: He was waiting for me to catch her. He had a tracking device on her car. Christian was very possessive, and like, he didn’t trust her. He had a lot of trust issues with Whitley.

Because of all that sh’de done. Even though he cheated on her three times. He had a tracking device on her car. He would always see where it was at, in Southeast, and that was where Matt was.

Gale: Did she know about that? About the tracking device?

Jordan: Or she wouldn’t have went I’m sure. But, she always knew, he always knew where she was. He seen that she was at Matt’s a lot. And him and Dylan Swearingen, Christian got a phone call from [beeped name] who Dylan and [beeped name] were friends. He told him that all he needed was 2000 dollars, and he could flip a bunch of meth, and turn it into like 20 grand. But, I’m not sure if those numbers are the exact.

Gale: Yeah, I get the gist.

Jordan: So, and Christian said, “Hell no.” Like uh-uh (negative). That was not what Christian was about. But, Whitley and Dylan Swearingen were about it. And if Christian knew that

Whitley wanted a part of that, he would have been done with her. And she would have lost all of her luxuries.

Gale: Okay. Now, who is the Dylan fella?

Jordan: I want to say Dylan was there, when Christian died, I want to say he was. Whitley has told me two completely different things. Because Christian, all right, this is back to when

Whitley was cheating on him. Christian was gonna come home early, to catch her. And-

Gale: Okay, so Dylan went and picked up Christian?

Jordan: Mm-hmm (affirmative). Because he wanted to catch Whitley cheating on Matt.

Gale: All right. Let’s go to the day that this all happened. Okay?

Gale: Let’s start from everything you know about that day, okay?

Gale: So, Dylan goes to pick up Christian?

Jordan: Mm-hmm (affirmative). And there’s this drug that’s called Triple C’s. It doesn’t show up in your system, and it takes you off of your ass. Like, completely. And-

Gale: I don’t want to know that-

Jordan: See, right. That’s what I’m saying. And Christian, his job offered a drug test. So, they wanted to get all messed up one night. Off of Xanax, and Triple Cs, but the only way that she could have got him up them steps and into that bathroom, was on Triple Cs. And the first time that I’ve done them, she introduced them to me. She knew they won’t show up in your system. Also, Dylan Swearingen checked himself into Alliance a week after, or

it was either a week after, or a couple of days after.

Gale: All right. I need you to tell me every single solitary thing that Whitley has ever told you, about Christian’s death.

Gale: Now, why would she tell somebody this?

Jordan: Because we were best friends, at that time.

Gale: So, she felt like she could tell you anything?

Jordan: Yes. And honestly, I’ve always liked Christian. Christian was a very well-liked person. The only reason why I was her friend is that I could get information out of her. Which I know is a sneaky thing to do, but I’m serving justice, type deal, like, I want to get the bottom of it. Because that is not right. That’s bullshit. Yeah, you’re like oh it was suicide; no it’s not.

He was going there to break up with her. He wanted all of her stuff out. He was done with her. He did not care about her anymore. Me and my friend [beeped name], she broke down, and Whitley Goodman said out of her own mouth, “I didn’t mean to do it.

It was a freak accident. I had to tell someone, because I cannot get this out of my chest.”

Gale: Who said this?

Jordan: Yes, I did it, it was a freak accident. I didn’t know what else to do. I have to tell someone, because it’s eating me alive.

And then Dylan, right when it happened, Dylan went to go talk to the Andreacchio’s about something. I’m not sure what, I was not there, there’s no way I could have possibly known. He was trying to get to them before Whitley did, is what it was. And he didn’t, like, Dylan and Whitley cut off all ties after that happened.

But, now, to this day, they’re cool. Because she, like they, them two used to pick me up from school. And plus me and him were like something at one point. But after it happened, they cut off all ties with each other, and Dylan was trying to get to

Not sure why, I’m not, haven’t gotten depth of why. But, that is what I know.

Gale: Why would they say they were shooting guns, the night before, if they weren’t?

Jordan: Because him and Jett are close.

Gale: Well, do you reckon she got any insurance money?

Jordan: I think it went, all to his ex-girlfriend. They weren’t as deep as him and his ex. I’m telling you, like it’s just crazy how it all played out…Like, it all fits together like a puzzle piece.

Gale: Yes, it does. Okay, anything else we can write that we know for sure?

Jordan: Uh-uh (negative). Like, all this was brought to me for a reason. How did they, this mentality I have, for a reason. And for like, this specific reason. You know? Justice just needs to be served.

Jordan: It really does.

In this episode, we meet Sheila Wysocki, a private investigator who agreed to work with us and the Andreacchio’s on the case. Sheila assembles a team of PI’s, all of whom are reputable and well-experienced. They devise a plan to interview witnesses who should have been interviewed in the beginning but never were. Their first plan of action is to seek to get Whitley on the record to tell her side of the story.

Executive Producer Jacob Bozarth travels to Key West, FL with 3 other private investigators (Michael Kenney, Jay Marin, and Claudia Barrios) where Whitley currently resides and begin the quest to find her and speak with her about Christian’s death.

We also hear from a few others who are acquainted with Whitley and they tell us what they know about her and the case.